I took most of the day to clean the front room of the Garage, which turned out to be a bit of a task.  With between 7-9 people regularly here, we quickly accumulate a lot of stuff.  After taming down several piles of 'stuff', I think it's time to design in more wall storage.
Pictured are Ian and Mandy, taken yesterday from my trip to U-Rock.
Add comment

I went to hang out at U-Rock for a little while today and see how everyone was doing.  While there, I took a tour of the new wing which is mainly the new library.  It's a pretty nice setup and should be fun when I return in '09.
Add comment

After a brief warm spell, the temperature dropped sharply.  Too chilly and windy to enjoy a bike ride :(
The stage as seen from the light board.
Add comment

Noah had to buy four new ties for his Jeep, and here his Jeep sits atop random blocks.  It looked classy, so I had to have a shot.  The Town of Beloit police department didn't find it quite as amusing as we did.  We received a letter giving us 10 days to remove any cars parked on grass or face a large fine.  It's not that anyone complained--the police just saw it and didn't like it.  The "free" in "freedom" is really just there for historical reasons.
Add comment

Today was the last day of my contract for the company I was working with and I'm back in the job market.  It was an interesting assignment and I learned a few new things along the way.  There were a lot of coding practices they did I wasn't fond of, and I think as I get the time, I'm going to write about some of them and demonstrate why.  To be fair, most of what the programmers had done was good work and the project preformed very well.  One thing I did end up coming away with was the understanding that despite my new understanding of math, I still need to work on more efficient implementation.  I'm still somewhat new to the idea of being able to tackle problems mathematically (mainly algebraically) and although I can pound through the math and make a working implementation, I don't always produce the best implementation.  The trick with computer math is that there are several ways to achieve the same thing, but each is not equally good.  By simply rearranging how a problem is solved one can greatly improve the performance of the function executing the work--and this is something I'm going to work on.
I went to U-Rock today to assist with lighting for the spring production Hot L Baltimore.  After doing a quick setup, I helped on the set some more.  Pictured are some of the cast on state during rehearsal.
Add comment

My hard drive price tracking script has now been taking regular samples for over a year.  Here is a look at the three most interesting drives: 500 GB, 750 GB and 1000 GB. 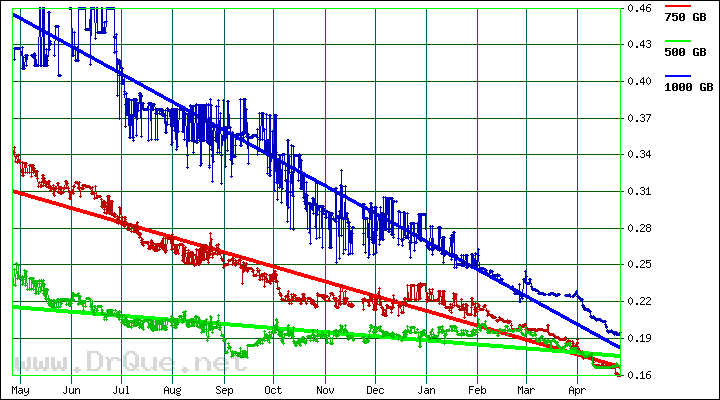 Last year at this time I picked up a 500 GB drive for $105 ($0.21/gig).  That same drive now goes for around $80 ($0.16/gig).  750 GB drives were around $255 ($0.34/gig) and dropped more then $135 (53%).  Then late this month, 750 GB drives overtook 500 GB drives for best price per gigabyte.  The price of a a full terabyte is harder to track because the listings included both the terabyte drives as well as 2x 500 GB drives in an enclosure.  Prices of terabyte drives fluctuate fairly wild for awhile, before starting to calm down.  But the price drop is fairly dramatic: More then a $220 price drop (>51%) in a year.  The x-mass season stalled the price drop from around the middle of October to about February.  In fact, 500 GB drives had periods of increased price during this time.
The drive price trending has been interesting so far and we'll see what the next year brings.
Add comment

This is a little bunny I saved from the jaws of my savage Vinny cat.  Being a kitty, Vinny has the natural instinct to hunt and kill--except she doesn't need to.  So often I walk the yard to find the small animals that have fallen victim to Vinny.  She won't eat them--she just kills them.  This evening, I herd a strange cry from outside and I knew what was going on.  Sure enough, Vinny had found this little bunny and was tossing it around.  I got to it in time and although shaken up, it was unharmed.  After this picture was taken, I returned the bunny outside, placing it in some thick bushes.  Hopefully this little guy stays away from my vicious cat in the future.
Add comment

I opened a safe deposit box today at my bank and placed my 1 terabyte external hard drive inside.  It contains hundreds of gigabytes of pictures, all the software I've written over the years and every other piece of original data I have.  In the past, I kept an external hard drive in a fireproof box.  But this drive is off-site and should be as securely stored as any backup device can be.
Pictured is my trip to the scrapyard to recycle some metal from an old fence.  I got $18 for a bunch of stuff I didn't want, and it's not going into the landfill.  I dig this recycling thing.
Add comment

Last week the Garage Crowd and I started cleaning out the old foundation behind the house.  For basically the last 12 years, it has been allowed to grow wild.  But there has been talk of wanting to start a garden, and that area seems perfect for the job.  So, I picked up some shovels and a machete, and went to work.  Most of the foundation had been overgrown with briers.  All of this was cut down, raked up and burned.  Two small trees were removed and a lot of junk was pulled out of the foundation.  Today, most of the junk was hulled off to the landfill.  The garden area is ready to be tilled.
Pictured are the high waters in downtown Janesville.  Sandbags have been laid out and the door in this picture is underwater.
Add comment

I did a 15 mile bike ride today and went into Beloit looking for high water.  As this picture shows, water levels are quite high.  This year produced a real winter--the first we've had in a long time.  A snowfall in early December laid a blanket that pretty much laster the entire season and at one point we had 20 inches on the ground.  As the weather began to warm back up, this water had to go somewhere and the river rose quite a bit.  I've seen signs of high water all over and with this bike ride I planned on seeking out pictures of this.  However, the downtown Beloit area didn't have too much.  Nonetheless, it was a great ride.
Add comment