Attended the Rockford AirFest today with Liz.  We arrived around 2:00pm and planned to stay the remainder of the show.  It would have been a fine day for shooting, but a number of events conspired against us.  First, we were made to empty our water bottles by a guard before boarding a shuttle from the parking area to the show.  We were informed we would be able to refill our water inside.  This was a completely untrue and I was very, very unhappy about that.  The show area was almost too small.  The organizers, although thankfully lacking in much of the advertisements of the Janesville show, separated the decent observation areas from the rest of the show.  It cost additional money to be in this area and was only about 1/4 full.  What made it worse was about half of that area had tents, meaning there was no decent view of the field from behind them.  Behind that were several large aircraft on display, blocking the remaining view.
Despite these problems, I did enjoy the show.  They had some of my favorite aircrafts on display, including a B-52 Stratofortress and an A-10 Thunderbolt (aka. the Warthog).  The performances were pretty good as well and most of my shots of the day were of them.  I shot mostly with my 75-300mm lens in aperture priority to keep the shutter speeds as high as possible.  There were some clouds in the sky and those made for a nice backdrop in a few shots.
To go with the rest of the day, the last 30 minutes of the show were canceled due to an incoming thunderstorm.  I had anticipated this and packed an umbrella and a plastic bag for camera equipment.  Liz and I stood in the rain for about 20 minutes waiting for the bus to return us to the parking area.  Naturally, by the time we reached the parking area, the rain had stopped.  But the rain is the only thing I won't hold against the show.
Pictured are the AeroShell Aerobatic Team in their T-6 Texans--aircrafts that go back all the way to 1938.  While their demo was fairly tame when compared to some of the jet demos, their thick tracer smoke made for very nice pictures.

Today I've completed my twenties.  This being the case, I went out with a big group of people and we stuff ourselves with sushi.  Pictured is our group (less me).  From left-front, going around the table counter-clockwise: Jai, Steve, Noah, Sean, Tyson, Liz, Heather, James, Kelly and Ollie.

Hard drives prices have been jumping around with interest.  In March, 750 GB drives were running at a better prices then 500 GB drives.  They stayed close until April, when the 750s started to beat the 500s fairly strongly.  But then in late May, 750s jumped back up and 500s continued to fall.  Now, 500 GB drives are again below 750s.  The average price is dropping down to $0.15 a gig, which is nice--especially when one considers this time last year the best price was around $0.21/gig. 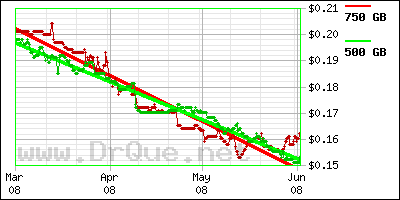 Early this morning (around 1:00am) I found the hard drive on the web server was full.  This is a 60 GB drive and the sum of DrQue.net is just shy of 15 GB.  Clearly, something else was eating the space.  I flush the web server logs ever few months and they usually never grow beyond a couple hundred megabytes, so I knew it couldn't be that.  There really isn't anything else on the Indigo Dragon.
I wrote a script some time ago to break down space usage of a directory.  I used this script to check what areas of DrQue.net use the most space.  The script is easy to work with.  It is given a root path to start from and a list of directories to ignore and creates a CSV file with the results.  I modified this script to check the root of the Indigo Dragon, excluding non-local directories (/mnt, /proc, /dev, ext.).  I also added a check so the script didn't follow directory links.
The results: some set of system log files were eating around 16 GB of space and a storage site of the the Member Area had an other 16 GB I had forgotten all about.  I trashed the log files and moved the forgotten data.  So now, all is well.
I took an 18.5 mile bike ride this afternoon and made a loop around the north-eastern edge of Beloit.  Pictured is a fine road in the middle of no where.

2 comments have been made.

Dangnabit! Your thingy won't let me sign in. Anyway... Hello! You should come visit and we'll go for a bike ride in all the pretty foresty stuff behind my house! ps- I got my A Cert.! Working on Net and MCDST now. Talk to you later, hopfully over hotwings when you come visit. *nudge nudge*

I started reading the book "Lolita" for my summer class today.  As usual, it is an audio reading.  Despite creeping out my roommates with the subject matter (the beginning of the book is mostly the main character recalling his lust for adolescent girls) it is a really good read.  The writer, Vladimir Nabokov, tells a very interesting story and despite the fact the books jumps around from recalled memories, day dreams and journal entries, I don't find myself getting lost or bored.  I find it particularly funny when the lead character, Humbert, goes off on something he doesn't like.  I found myself laughing out loud a few times because of this.  I managed to read about a third of the book in one sitting.  Looks like I'm going to enjoy this part of my homework :)
Jessica ("Jess") at coffee last night, technically this morning.
Add comment